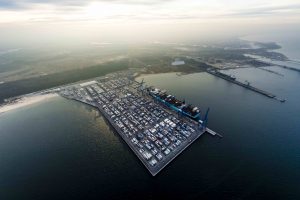 The second deepwater berth (T2) of the container terminal DCT Gdansk in Poland was opened on 24 October 2016.

The new berth, 650 meters long and 16.5 m deep, is equipped with 5 modern and largest in the Baltic region STS cranes able to handle ultra large ships of over 20,000 TEU and 15 fully electrified RTG cranes supported in operations by more than 30 new IMV trucks. With the new berth in operation the annual handling capacity of the terminal will be doubled to 3 million TEU.

According to the company’s press release, the construction of T2 berth was finished on time and on budget. Funding for the project came from own resources of the terminal operator, as well as loans granted by a consortium of Polish and foreign banks with the active participation of DCT Gdansk SA shareholders.

“This investment cements the position of DCT as the largest container terminal in the Baltic and strengthens the role of Port of Gdansk as a key port in this part of Europe”, says Maciek Kwiatkowski, Chief Executive Officer of DCT Gdansk SA.

DCT Gdansk is the largest and fastest growing Polish container terminal and the only deepwater facility in the Baltic Sea region having direct ocean vessel calls from the Far East. In 2014 the terminal handled about 1.2 mln TEU, however in 2015 the volumes decreased by 10% down to 1.1 mln TEU, mainly due to the Russian economic sanctions and currency devaluation.