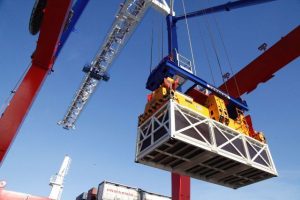 Russian port of Bronka has started testing an innovative container for bulk cargoes, writes PortNews. The container is developed by Russian company UNA and promoted by KOTTA Container, both firms are based in St. Petersburg.

The framework of the container is made of steel, passed preliminary trials according to the program and methodology approved by the Russian Maritime Register of Shipping. The framework is not in contact with the cargo during the transportation. The body containing the cargo is located inside the framework and is made of corrosion-resistant materials, which can be – depending on the type of cargo – moisture resistant laminated plywood, aluminum alloys, stainless steel or plastic.

The container is ISO standard, of 1CX type and has a height of about 1.6m, which allows its double-stacking at a rail platform for rail transportation in Russia. The maximum payload of container is announced up to 34t., depending on the cargo density.

As it can be handled with the standard container handling equipment, its utilization makes it possible to transport grain or other bulk cargoes by rail, accumulate ship lots in port and load them onto vessels at a container terminal, without investing into specialized equipment or port infrastructure.

The containerized bulk handling technology is seen to be attractive for Russian container terminals that have been experiencing low utilization since lately and are eager to regain Russian cargos, which are currently handled by the ports of Estonia, Latvia, Lithuania. This largely concerns bulk cargos, such as mineral fertilizers, sulfur.

The new container allows ecologically safe handling of such cargoes. It is water- and airtight, has neither doors nor hatches in the sides or bottom, the opening and closing of the cover of the upper unloading aperture occurs directly above the hold, minimizing pollution on the quay.

The size of the ship lot of bulk cargo depends on the number of containers involved in the transportation from the shipper, the available storage area at the terminal and the quay depth. The speed of loading on a vessel with two STS cranes can be up to 20,000 tons per day. However, final conclusions on the size of ship lots will be made after the technological testing of the container is completed in April 2017, as well as following consultations with logistics and environmental specialists and negotiations with potential cargo owners.

The new deep-water port of Bronka is located 55 km west of Saint-Petersburg. The port began its operations at the end of 2015 by handling CMA CGM regular calls. Bronka offers a container terminal of 1.45 mln TEU and a ro-ro facility for 260,000 units per annum. At the next stage, the container capacity of the port is planned to be expanded up to 1.9 mln TEU.