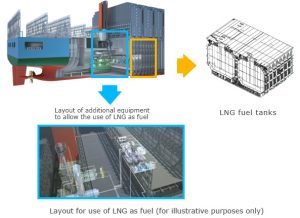 The new vessel of a 20,000 TEU capacity has been under development since 2015, when MOL signed a deal with SHI for 4 such ships in anticipation of using LNG as a fuel, bearing in mind the environmental regulations on carbon footprint of merchant vessels that are currently becoming more stringent. MOL have explored the use of LNG fuel in light of growing demand for next-generation clean fuels to replace conventional heavy fuel oil. The company admits that LNG bunkering system for the vessels has not been established yet but expects it “in the near future as studies on the use of LNG as a clean, environmentally friendly fuel are underway around the world”.

At the construction stage, MOL and SHI exercised a joint study on vessels in service, performance evaluation, compliance with new regulations, and risk assessment (Hazard Identification Study) and completed the basic design in March. The design includes the suitable LNG fuel tank and supply system to ensure maximum engine power output for ultra-large-scale containerships. The vessels will be equipped with the dual-fuel engine systems that allow the use of either LNG or heavy fuel oil. The design provides for an optimal retrofit plan for the vessels in service, as well as the emergency measures in case of LNG leakage.

MOL positions this series of vessels as its environmentally advanced next-generation ships.

On March 27, the first vessel of the series was delivered. MOL Triumph (20,170 TEU), currently the world’s largest containership, can be converted to run on LNG fuel when the LNG supply becomes commercially available. MOL Triumph will set off on her maiden voyage from Xingang this month and will be deployed in THE Alliance’s Asia – Europe trade.