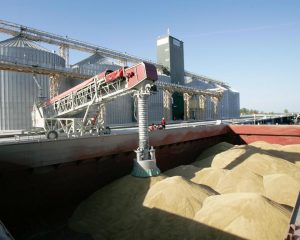 Russian JSC “United Grain Company” (UGC) has set up its 100% subsidiary – Far-Eastern Grain Terminal Ltd, with the aim to design and build a grain handling facility in the sea port of Zarubino (200 km to the south of Vladivostok, 70km to the Russia-China border), as announced in UGC’s press release of November 11.

Until the year end UGC will re-assign to the new company the long-term lease of the land plots for the future facility and the rights of the customer under the terminal development contract. The executor of the contract, the Russian R&D company Morstroytechnology, is currently performing engineering studies on the coastal line and water area in Zarubino port and is finalizing the first part of the design documentation. In the nearest future Far-Eastern Grain Terminal Ltd will collect the documents to apply for a residency in Vladivostok Free Port.

The project of the new terminal’s construction is split into the following stages:

years 2018-2020 – construction of the first complex, with an annual grain handling capacity of 3 mln tons.

Stage 2: years 2021-2023 – extension of the silos and construciton of additional berths and other technological facilities in order to increase the handling capacity up to 10 mln tons per year.

Stage 3: further development of the terminal and increase of volumes handling.

As the main destinations for Russian grain exports are Africa and Middle East, the major volumes are shipped from Black Sea ports, mostly from Novorossiysk. At the same time, Siberia and Russian Far East possess a vast potential of grain production for distribution in Asia. According to the data provided by UGC, this potential is forecasted as 3 mln tons by year 2020 and 5 mln tons by 2030. However, today the growth is restricted by low level of the regional transport infrastructure and logistics. This explains the necessity for a modern specialized grain handling port in the Far-Eastern region of Russia.

1 comment on Russia plans to build a new grain terminal