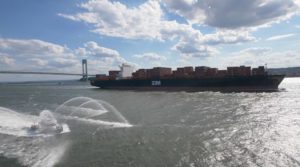 The ZIM Antwerp container vessel of 10,062 TEU capacity passed under the newly raised Bayonne Bridge in New York last week and called at Maher terminals in the port of New York and New Jersey, reports ZIM. ZIM Antwerp became the first vessel of such size to call the facility. To mark the historic passage, an official ceremony took place on board the containership, with the participation of Port Authority of NY & NJ, Maher terminals and ZIM USA representatives. ZIM Antwerp’s captain received a plaque commemorating the event.

The vessel is employed at the ZIM Container Service Pacific, one of ZIM’s flagship lines, connecting Asia with the US East Coast via the Panama Canal. Thus, the vessel arrived in New York after calling ports in China, crossing the new Panama Canal and calling the US ports of Savannah, Charleston and Norfolk. Before returning to Asia, it will head next to the port of Halifax in Canada.

George Goldman, President of ZIM USA said: “ZIM is a significant player in this trade and one of the leading carriers serving the Asia-East Coast trade, which is expected to continue to grow following the expansion of the Panama Canal. The trade is also served by another major ZIM service, the ZIM Seven Star Express (Z7S) along with additional complementary lines.”

Gary Cross, President and CEO of Maher Terminals, called ZIM “a loyal container customer of Maher Terminals dating back to the opening of our first terminal in the early 1970s”. He said: “This event adds to the list of important milestones we share together in our long relationship.  We applaud ZIM for their continued success and look forward to handling many more of their mega-vessels at Maher Terminals for many more years to come.”

The historic Bayonne Bridge has been undergoing the Navigational Clearance project since mid-2013, aimed at elevating its air draft up to 215 ft (65.5m) above water, so that ships of up to 18,000 TEU could pass under it. This would allow giant container vessels to call at three of the four main terminals of the port of NY/NJ – Maher Terminals and APM Terminals in Elizabeth and Port Newark Container Terminal in Newark. Before that, ships over 9,500 TEU could be handled only at the GCT Bayonne terminal. Along with ZIM Antwerp, three Maersk Line vessels also successfully passed under the bridge last week, heading to Port Newark Container Terminal.