A 6-at-a-time spreader to handle empties 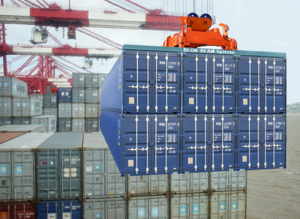 Whereas tandem and triple-spreaders are already in service at many global ports, they are designed to carry two or three loaded 40-foot containers abreast on each trip. BLOK-BEAM is intended to increase the crane’s productivity for empty boxes.

John Evans, Managing Director of BLOK-BEAM Ltd, notes that with ports handling over 500 million containers annually, of which as many as 25% are empty, this innovation can save billions annually. “We estimate that if only one-third of empty moves of containers are handled by BLOK-BEAM, the industry would save over USD 2 billion per year – before even considering the vast expense of idle time, fuel savings, general efficiency, losses at sea and safety,” says John Evans. Additionally, as the interlinked blocks stay linked up on board, BLOK-BEAM has the potential to cut on-deck lashing by more than 50%.

To further enhance productivity of the ports, BLOK-BEAM Ltd has designed a special triple-wide trailer, called the OX. The block of 6 boxes can be assembled in the yard, away from the quayside, and carried to the crane for loading as a single unit. During unloading, cranes can drop the BLOK straight onto the OX and just one driver can rapidly move the containers away from the quayside 6 times faster than normal. Because the BLOK is 3 containers wide, it is entirely stable and cannot be knocked over.

The BLOK-BEAM will be formally launched at the QSOE factory (manufacturers of the system), near Shanghai on 28 November 2016.