A new block train from China to Europe launched 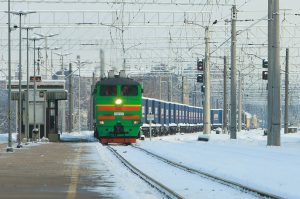 The first container train from the Yiwu city in China through Russia to Latvian capital city, Riga arrived at the Riga Central railway station on 5th November, reports the press release of Latvian railways. The service was organized by Latvian and Chinese railways, Yiwu platform, “Interrail AG”, logistics subsidiary of Latvian railway, “LDZ Logistics” and Russian container railway operator “TransContainer”. Thanks to successful cooperation of all partners involved the train has been organized in less than 4 months after signing of the Letter of Intent between SJSC “Latvijas dzelzceļš” (Latvian Railway) and China railway regarding the establishment of container train traffic.

The block train with textiles, bathroom equipment and household goods started in the rapidly developing Yiwu city (not far from Shanghai), crossed the China-Russia border at Zabaykalsk where the containers were transferred to the Russian rail tracks at the “TransContainer” terminal and travelled all the way through Russia to Riga. The total length of the route exceeds 11,000 km. The Russian part of the route was covered in 7 days, exceeding the planned timing.

The President of Latvian Railway, Edvīns Bērziņš said: “Together with our partners, we have managed to bring China closer to Europe via Latvia, today we are not only welcoming the first test train Yiwu-Riga but already working on new routes and proposals.”

After the successful arrival of the train, “Latvijas dzelzceļš” and “China Merchants China-Belarus Commercial and Logistics Cooperation” signed a memorandum of understanding on cooperation in development of marine and rail transport, especially with regard to the China-Belarus project “The Great Stone” and development of efficient traffic between China and Scandinavia.

The Yiwu-Riga block train is planned to run on a monthly basis. The next two trains are already scheduled.