Algeciras has potential for over 200 trains per week 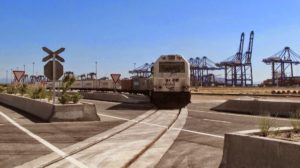 The Port of Algeciras can multiply fifteen-fold the number of its weekly freight trains to Spain’s hinterland by 2030, if it ensures a competitive rail connectivity. This is one of the main conclusions delivered by the consulting company TRN Taryet in its “Analysis of the potential demand to be captured by rail transport of the Bay of Algeciras”. The research was presented yesterday at the conference dedicated to the Mediterranean railway corridor held in Algeciras, informs the port’s press service.

More than 60 market players operating within the area of ​​influence of the Algeciras port participated in the study, confirming with figures, conclusions and recommendations the need for investing in the rail connection of the Port of Algeciras with Bobadilla and Madrid. Since 2013, this link has been a double priority in the Trans-European Transport Network (TEN-T) as part of the Atlantic and the Mediterranean corridors. However, the connection has been interrupted since 21 October 2018, after heavy rains had led to cutting the service in Arroyo de las Tinajas, 3 km from Bobadilla.

According to TRN Taryet’s study, until 21 October the Port of Algeciras had been moving by rail about 40,000 TEU per year in 14 weekly rotations (7 in each direction). However, the current demand of the port’s operators for rail transport is evaluated at 100,000 TEU, plus 30,000 Intermodal Transport Units (ITU), which would represent 2 mln tons of volume and 86 weekly trains (43 in each direction).

In the long term, the research shows that the potential demand by the operators would grow up to 211 weekly trains by 2030 (optimistic scenario). This implies the volume generated by the transfer of cargo from trucks to railway, as well as the increase of import/export traffic.

Notwithstanding, the report also indicates that even with the envisaged renovation projected by the Ministry of Development (Ministerio de Fomento), the Algeciras-Bobadilla rail link would still present limitations and thus would have the capacity of only 80-100 trains per week.

In order to overcome the limitations, meet the potential demand and ensure competitive and reliable services, the analysis recommends to plan additional investments homogenizing the services at different railway sections. This includes power supply in railway electrification system (now at 3 Kv DC at some sections and 2×25 Kv AC at others) and adaptation of gauges in tunnels.

As we wrote earlier, Valencia has also ordered a research on intermodal development to TRN Taryet, with the delivery date on 1 March 2019. With this project, Valencia aims to expand its hinterland, focusing also on railway access to its terminals.