APL to be charged over shipping military vehicles without license 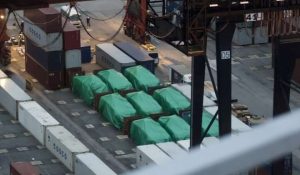 The Hong Kong Customs and Excise Department has pressed charges today against APL shipping company and the captain of the container ship which delivered nine Singapore military vehicles into the city from Taiwan in November 2016 without the required license, writes South China Morning Post.

9 Terrex Infantry Carrier Vehicles were shipped from Singapore to Taiwan for training exercises, after which they were to be returned to Singapore. On the way back, from the Taiwanese port of Kaohsiung the vessel called Hong Kong’s Kwai Chung Container Terminal, where the customs officers seized the vehicles as “undeclared materials” on 23 November 2016.

It was Hong Kong’s biggest seizure of “strategic commodities” in two decades, which caused a diplomatic controversy between Beijing and the Lion City, writes the newspaper. It was seen as a warning from Beijing over military ties between Singapore and Taiwan, which China considers a renegade province. Beijing said it hoped Singapore had “learned a lesson” and urged it to respect the one-China policy.

In late January, the troop carriers were released and shipped back to Singapore. Hong Kong customs said that in the investigation process, the department did not detect any role by the Singapore government in the possible breach of the licensing requirement and could not hold it responsible as it was only the consignee of the military vehicles.

However, APL, whose vessel carried the cargo, is now expected to be issued with a summons and the ship’s captain to be charged with importing strategic commodities without a required license, according to a government source with knowledge of the case.

Under Hong Kong’s Import and Export Ordinance, a license is required for the import, export, re-export or transshipment of strategic commodities. The maximum penalty for failing to obtain a license is an unlimited fine and seven years’ imprisonment.