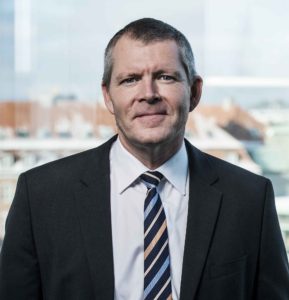 Global Ports Investments PLC (Global Ports), the leading operator of container terminals in the Russian market, has announced that on Monday, 26 February 2018, the company’s Board of Directors elected Mr. Morten Engelstoft, CEO of APM Terminals, as the new Chairman of the Board. Mr. Engelstoft will take over from Mr. Peder Sondergaard who left the Board in January 2018.

Peder Sondergaard had served as Global Ports’ Chairman for only 10 months, having been elected at the Board meeting on 10 April 2017, before he informed the Board that he intends to step down from his role on 31 January 2018, due to the fact that he is leaving his position as Chief Portfolio Officer for APM Terminals B.V.

APM Terminals is a co-controlling shareholder of Global Ports, holding 30.75% shares of the company.

Another 30.75% of the Russian port operator currently belongs to Transportation Investments Holding Limited (TIHL, operating under the brand name of N-Trans). However, in December 2017, Global Ports informed that TIHL had entered into an agreement to sell its 30.75% stake to Management Company Delo, a holding company for Delo Group, that operates grain and container terminals in the port of Novorossiysk, on the Russian Black Sea coast. Subject to a number of conditions, including antitrust clearances and other customary arrangements, the deal is expected to complete in April 2018.

Global Ports is the largest Russian container terminal operator covering 29.7% of the total container port traffic in the country. In 2017 the Group handled the total of 1.37 mln TEU, which exceeds its 2016 results by 6.9%. Its leading facilities First Container Terminal (FCT) in St.Petersburg and Vostochnaya Stevedoring Company (VSC) in Vostochny significantly increased their throughputs: FCT – 553,820 TEU (+15.3%) and VSC – 370,750 TEU (+23%). However, another large St.Petersburg facility – Petrolesport terminal – dropped 22.1% to 205,990 TEU and the new Ust-Luga container terminal also reduced its volumes by 9.8%, to 74,130 TEU.