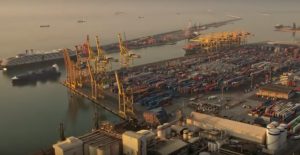 Barcelona has recorded an exciting growth of 25.3% in its throughput in the first quarter of 2017 y-o-y, the result which was surpassed only once in the port’s history, i.e. in the second quarter of 2008, informs the Port Authority. The throughput of 13.8 mln tons has been achieved due to excellent results in handling containerized cargoes, bulk liquids and Ro-Ro.

The port highlights that Asia remains its main market, as it is the origin of 74% of import traffic and the destination for 46% of export shipments. And this is confirmed by today’s announcement of the Japanese shipping line Mitsui O.S.K. Lines Ltd. (MOL), that it will make 3 additional calls to Barcelona in order to cope with the shortage of capacity on its vessels for import shipments from the Asian continent. Three vessels will call Barcelona out of schedule only to discharge import boxes, to help ease the current situation with overbookings from Asia to Europe. The first of the vessels – MOL Emissary – already called the port last Saturday, April 08.

With regards to other cargoes, Barcelona handled 3.5 mln tons of bulk liquids, which represents a growth of 23.4% over the same period of the last year, with all traffic segments showing double-digit growth: imports (+27%), exports (+65%), cabotage (+14%).