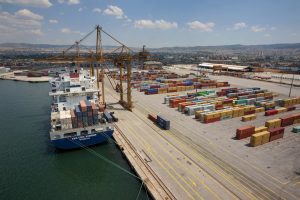 Today at its Board of Directors’ meeting, the Hellenic Republic Asset Development Fund (HRADF), Greece’s body responsible for the state assets privatization, has determined the winner of the tender for the concession of Thessaloniki port. It is the consortium formed by Terminal Link (port operating subsidiary of French shipping line CMA CGM), German private equity fund Deutsche Invest Equity Partners GmbH and Belterra Investments LTD (a company registered at Cyprus in July 2016 by Ivan Savvidi, a Russian businessman, ex-deputy of the State Duma from the ruling party “United Russia” and owner of tobacco factory “Donskoy Tabak”).

Last Friday, all participants submitted their improved financial offers, as it had been asked previously by HRADF after opening the binding bids of the three contesters: ICTSI, DP World and the above-mentioned consortium.

The highest bidder’s improved financial offer provides for a consideration of EUR 231,926,000 for the acquisition of 67% of shares in Thessaloniki Port Authority S.A.

The total value of the concession agreement amounts to EUR 1.1 bln and includes, apart from the aforementioned consideration, the mandatory investments amounting to EUR 180 mln over the next seven years, the expected revenues for the Hellenic Republic from the port operations amounting to over EUR 170 mln (3.5% of the port’s turnover), the expected dividends receivable by HRADF for the remaining 7.22% shareholding, as well as the estimated investments, on top of the mandatory ones, during the concession period, which will run until year 2051.

In today’s press release, HRADF comments: “The above development signals a new era for the Port of Thessaloniki, the prospects of economic development of Northern Greece and the country as a whole”.

Following the winner’s announcement, the Court of Auditors will review the legality of the process in the coming weeks and after its approval the share purchase agreement (SPA) will be signed. After the required approvals of the competent authorities’ and the satisfaction of certain conditions under the SPA, the transaction will be completed.

According to Constantinos Mellios, Chairman of Thessaloniki Port Authority, the winner of the tender will take over the port’s operations since autumn 2017.

Thessaloniki is multipurpose port at the Thermaicos Gulf in Northern Greece. It operates on 6 piers with a total quayline of 6,200m and a berth depth of up to 12m. The port provides services for passenger traffic, cruise, coastal shipping, as well as general cargo handling. It is also Greece’s second largest container port handling about 350,000 TEU per year, with the maximum volume of 440,000 TEU achieved in 2007. Container throughput consists mainly of domestic volumes and transit traffic to the neighbouring countries of south-east Europe. The port is directly connected to Trans-European and regional transport networks. Thessaloniki port operates a Free Trade Zone according to the EU Customs Code.

According to Reuters, the market value of the port’s stake on sale was EUR 138.8 mln last week.