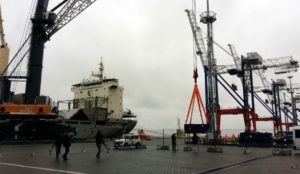 On 7 September, Bronka Port (Russia) welcomed СOSCO’s dry cargo carrier LIAN HUA SONG that passed from China to Russia along the Northern Sea Route (NSR) for the first time in the history of the two countries’ relationships, informs PortNews.

The vessel (length – 180m, width – 27m, draft – 7.9m; deadweight – 27,500 t) left the port of Lianyungang on August 1, sailed along the Russian coast by the NSR, then round the Northern Europe and having passed the Baltic Sea arrived at the Multipurpose Sea Cargo Complex Bronka, the new deepwater terminal in the port of St. Petersburg.

The vessel delivered equipment for construction of Moscow subway and for renovation of Russia’s fertilizer producing facilities.

The safety of this voyage, its icebreaking and navigational support was provided by the Russian part: the Federal Agency “Rosmorrechflot” and the federal enterprise “Atomflot”.

At the official ceremony celebrating the vessel call, Tu Deming, Director General of СOSCO SHIPPING Lines (Russia), has said that СOSCO started using the NSR since 2013 and pays a special attention to the development of this shipping passage.

“We hope to use the Northern Sea Route in the future since it allows for reduction of transit time and transportation costs,” said Tu Deming.

He thanked the management of Bronka Port for the high level of the call organisation and marked the port’s technological infrastructure and professionalism of its employees.

“The number of vessels on this route is growing from year to year. The first voyage of СOSCO’s ship from China to Russia by the Northern Sea Route with a call at Russia’s port is a significant contribution to the development of China-Russia relations in keeping with comprehensive partnership and strategic cooperation”, he said.

Tu Deming also expressed his confidence in further cooperation between the companies.

Aleksey Shukletsov, Executive Director of Fenix LLC (owner and operator of Bronka Port) commented: “It is the first experience of a commercial voyage from China to Saint-Petersburg by the Northern Sea Route and we are proud to take part in this significant project. Our long-term goal is to become a key port for supplies to Russia”.

The NSR is the shortest sea route between the European part of Russia and the Far East. It crosses the seas of the Arctic Ocean (Barents, Kara, Laptev, East Siberian, Chukotka seas) and part of the Pacific Ocean (Bering Sea).