How about cruising to North Korea? 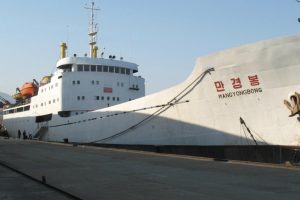 The regular ferry line will connect the ports of Rajin (North Korea) and Vladivostok (Russian Far East) already this month, informs PortNews. The unique service is expected to revitalise business connections of the two countries and restore regular passenger and cargo shipping forlorn since the 1980s.

The passenger/cargo ship Man Gyong Bong (flag of North Korea) will be deployed at the service making six voyages per month. The overnight transit time will be 9-10 hours. According to the ship’s agent, the vessel will depart from Rajin at 7 pm and by 10 am of the following day all customs procedures in Vladivostok are to be completed. After a two-day stay in the port the ship will leave Russia for return to North Korea. When staying at both ports the passengers are provided with accommodation and catering on board.

The price of the cruise has not been revealed yet. According to the ship’s agent, it is comparable to travelling by car or rail, but the sea route is shorter and more comfortable.

The Man Gyong Bong, built in 1971 in North Korea, used to serve as a training vessel and after that was out of operation for a long time. The vessel has been renovated to fit its new tasks. It is 97 m long, has deadweight of 1,802 and cargo capacity of 3,317 t.

The Man Gyong Bong is able to accommodate 193 passengers and carry 1,500 tons of cargo, 24 TEU and vehicles. The crew is fully North Korean.

In the future, the line is to be extended to Wonsan, the largest North Korean seaport and a popular seaside resort.