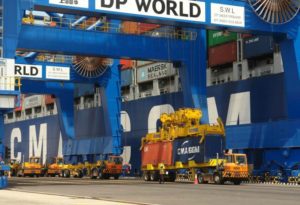 The illegal seizure of Doraleh port by the government of Djibouti will have minimal impact on DP World’s finances, the port operator said yesterday, as the UAE government voiced its support of the Dubai-based port operator.

“There will be no material financial impact to the group as a consequence of these events,” the company said in a statement to Nasdaq Dubai, where its shares are traded. According to The National, DP World’s shares remained relatively unchanged during trading on Sunday and closing at USD 25.06.

Earlier, Anwar Gargash, the UAE Minister of State for Foreign Affairs, wrote in Twitter: “Djibouti government’s seizure of the Doraleh port is regrettable. Agreements, commitments and reassurances didn’t hold up to arbitrary measures against DP World.’’

Dubai’s government called the actions of the African nation an “arbitrary” flouting of a signed agreement.

On 23 February, DP World announced that the Government of Djibouti illegally seized control of the Doraleh Container Terminal S.A. from DP World-owned entity that designed, built and operated the terminal according to the 30-years concession awarded by the Djibouti Government in 2006.

DP World possesses a 33% equity stake in the port of Doraleh, which has a capacity of 1.25 mln TEU.

The facility seizure became the culmination of the Government’s campaign to force DP World to renegotiate the concession terms. Since December 2017, the Government of Djibouti has been seeking to enforce the law against the concession contract. This has culminated in a final demand that the contract be renegotiated by 21 February 2018, and the termination of that contract by Presidential Decree on 22 February 2018 and consequently expropriation of all the assets of Doraleh Container Terminal.

DP World informs that it has commenced arbitration proceedings at the London Court of International Arbitration to protect its rights, or to secure damages and compensation for their breach or expropriation.