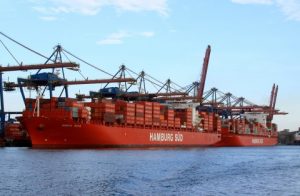 Earlier this week we wrote about the Oetker family meeting that was to take place on Wednesday, November 30 with the aim to decide on the future of the German container shipping line Hamburg Süd and of Maersk’s interest in the deal. And today Maersk Line and the Oetker Group have reached an agreement for Maersk Line to acquire Hamburg Süd, states Maersk’s press release.

The acquisition is subject to a satisfactory due diligence, final agreement and regulatory approval in China, Korea, Australia, Brazil, the United States and the EU. Maersk Line expects the approval of the sales and purchase agreement early in the second quarter of 2017 and the regulatory process to last until the end of 2017. The transaction is expected to be closed at the end of 2017. Until then, Hamburg Süd and Maersk Line will continue business as usual.

Financials of the acquisition are not disclosed, but experts evaluate the sale price to be around $4 bln.

According to the data in Maersk’s press release, Hamburg Süd operates 130 container vessels with a container capacity of 625,000 TEU and has over 250 offices across the world with 5,960 employees. Its turnover in 2015 was reported USD 6,726 mln of which USD 6,261 mln stem from its container line activities.

With the acquisition, Maersk Line will increase its container capacity to 3.8 mln TEU (from current 3.1 mln TEU) and its global capacity share to 18.6% (from current 15.7%). The combined fleet will consist of 741 container vessels with an average age of 8.7 years, down from current 9.2 years.

“Today is a new milestone in Maersk Line’s history. I am very pleased that we have reached an agreement with the Oetker Group to acquire Hamburg Süd. Hamburg Süd complements Maersk Line and together we can offer our customers the best of two worlds, first of all in the North – South trades,” says Søren Skou, CEO of Maersk Line and the Maersk Group. – “The acquisition is in line with our growth strategy and will increase the volumes of both Maersk Line and APM Terminals”.

Skou also added, that it is a “unique” opportunity to boost Maersk’s presence in Latin America, grow its reefer business and cement its global leadership.

Along with Hamburg Süd, the German line markets its services through the brands of CCNI (based in Chile) and Aliança (based in Brazil). Maersk Line highlights that Hamburg Süd and Aliança will continue as separate brands, serving customers through their local offices. The headquarters of Hamburg Süd will remain in Hamburg.

“Hamburg Süd and Aliança have competitive and attractive customer value propositions, which we want to preserve and protect,” says Søren Skou.