This week in ports all over the world has been full of dramatic events, as if some supreme evil spirits were playing on the eve of Halloween night.

A container exploded at the Evergreen Terminal in the port of Los Angeles at 6pm on Tuesday, 30 October. Luckily, no one was injured, although the port had to evacuate over 100 people, including truckers.

The container, which was absolutely ripped apart by the blast, is reported to be one of 10 containers with scrap metal due to be exported. Randy Allen, Los Angeles Port Police Deputy Chief, commented on the cause of the incident: “Scrap metals which contain some chemicals and some other agents possibly could have led to the explosion.”

A bomb squad was sent to inspect the other containers of the shipping lot to make sure there was no additional danger.

The same day brought a disaster to the Italian port of Savona on the northern coast of Ligurian Sea. A severe storm with strong winds, rain and high waves caused flooding in the port which affected two parking areas, full of vehicles. The salt water caused car batteries to explode and catch fire in the early hours of the morning of 30 October. Again, no injuries in the blaze, which took 14 teams of firefighters to put out. 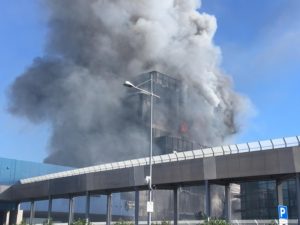 Most of the vehicles completely destroyed by the fire were brand new Maserati. It is reported that several hundred of them were stored at the terminal ready for export to the Middle East. Apart from these, trucks and other vehicles parked at the terminal were also caught in the blaze.

The local media report that this is already the second major fire to break out at the port of Savona during a week. On 23 October, the Port Authority building was completely destroyed by the fire (see photo).

Yesterday morning, 31 October, a passenger ferry crashed into an STS crane at the APMT container terminal at the port of Barcelona, Spain. The crane collapsed on containers, 7 of which contained flammable products and caught fire. Dock workers were forced to flee the accident scene, so, luckily, no one was injured.

At the press conference, which was organized by the Port Authority the same afternoon, Jose Alberto Carbonell, Managing Director of the Port of Barcelona, said that the containers with dangerous goods did not pose a high risk and the fire had been soon extinguished.

The vessel that caused the collision was the RoRo-passenger vessel Excellent, operated under the Italian flag by GNV, Italian company Grandi Navi Veloci. It is reported to be manoeuvring in the port in adverse weather conditions, with strong winds that moved the vessel off course.

GNV confirmed that all passengers and crew members were safe and well. The vessel arrived from Genova and was carrying a total of 414 passengers, 59 of which were destined for Barcelona. However, all passengers disembarked at Barcelona and those to continue their voyage to Tangier, were to be transported by another GNV vessel. According to the Port of Barcelona, this next ship was to arrive the same evening.