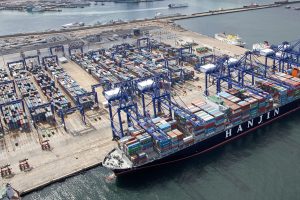 TTI Algeciras operates the second largest (after APMT’s facility) container terminal in the port of Algeciras, Southern Spain. Its annual capacity is 1.86 mln TEUs. It has the area of 35,8 hectares and 2 quay lines of 650m and 550m length, with 18.5m and 17.5m drafts respectively. The terminal is equipped with 8 STS cranes and 32 Automatic Stacking Cranes on rails, which allows it to service the newest generation of 18,000 TEU-plus megaships. Currently the vessels of Maersk Line, CMA CGM, Cosco Shipping, MOL and K Line call the terminal.

Initially, Hanjin owned 100% of the terminal after the port authority awarded the company a concession to build and operate it. However, it sold 75% stake to the consortium of IBK Securities and Korea Investment Partners as part of its restructuring efforts. Now HMM will consolidate 100% stake in TTI Algeciras. It is expected to finalize the purchase in late December following the due diligence on the assets, which will start on November 28 and last for 2-3 weeks.

HMM will be allowed to operate the terminal until July 2040, when the contract with the Algeciras port authority expires.

“The terminal has a significant strategic importance, because it is located at the crossing point of the Europe – South America line and Asia – North America line,” said an HMM official. “Also it is close to the new emerging market of North Africa, the acquisition will contribute to enhancing HMM’s mid- and long-term competitiveness.”

TTI Algeciras will become the fourth facility in the portfolio of HMM’s port assets. It also owns California United Terminals and Washington United Terminals in the United States and Kaohsiung Hyundai Terminal in Taiwan. Besides, HMM holds 20% in Rotterdam World Gateway in the Netherlands.

Algeciras, strategically located in the Strait of Gibraltar, is the largest container handling port in Spain and in the Mediterranean, acting as a global hub for the shipping routes to unite Europe, Africa, America and Asia. Its throughput in 9 months of 2016 was 3,570 th. TEU.