Hong Kong port to relocate or have homes on top? 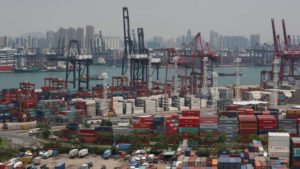 The Hong Kong Task Force on Land Supply, a government-appointed committee, is considering the options to free land for housing. Among a number of solutions there are such exotic ones as relocating the Kwai Tsing container terminal and building homes on elevated platforms above the port, informs South China Morning Post.

A public consultation will be held in March 2018, where Hong Kong residents will be asked which option they support.

The Task Force are rather open-minded about both above options. “We’re not saying it’s feasible, or not feasible at this moment. But we recognise either option does have certain technical challenges that need to be addressed. If we are to relocate the terminal, or build on top of it, how are we going to ensure that the normal operations won’t be disrupted?” said Stanley Wong Yuen-fai, Task Force chairman.

The port, together with adjoining land plots for backup facilities, accounts for 380 hectares. The government committee admits that to find a suitable site to relocate the container terminal would be a tough challenge, as it is highly unlikely that there would be another 380 hectares of available land along the coastline, which leads to the necessity of land reclamation. Overall, the relocation project might take over 15 years.

A spokesman from the Hong Kong Container Terminal Operators Association commented that the relocation option would be “a major infrastructure project for Hong Kong”.

He said: “It is an idea that would require the most extensive and thorough discussion among all stakeholders. Hong Kong has an important role to play as the region’s logistics hub. The industry is also a major pillar to our economy. Trading and logistics account for 23% of Hong Kong’s gross domestic product and 20% of Hong Kong’s employment.”

The other idea to build residential flats on 60 to 80-metre podiums above the port also sounds questionable, as it could cause a lot of technical and environmental problems. Environmental group Green Sense’s voluntary chief executive Roy Tam Hoi-pong opposed this idea, saying it would create an “environmental disaster”.

“I am not very sure who would like to live atop a container terminal that is operating non-stop throughout the year,” he said.