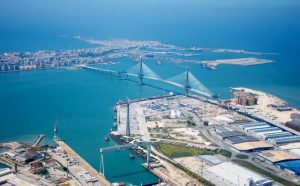 The Cadiz Bay Port Authority (Cadiz, Spain) will invest EUR 20.7 mln in 2017 in various works, listed in the multiannual Investment Plan, as they have been approved in the corporate business plan for the next fiscal year by the Board of Directors which held its meeting this week, announces the Port Authority’s press release.

As in previous years, the major part of the investment (EUR 11.36 mln) will go for the construction of the New Container Terminal. This amount will be shared between the following works: access railway tracks (EUR 4 mln), area pavement (EUR 4 mln, subject to the availability of a private managing company) and civil works of the new terminal (EUR 1 mln). Moreover, EUR 260,000 will be spent on the rehabilitation of Las Redes beach in the Cadiz Bay in pursuance of the Declaration of Environmental Impact and EUR 200,000 to clear the debris left from the construction works.

Besides, for the next fiscal year EUR 1 mln is allocated on the construction of the new border control post which is to be completed in 2018 and will require the total investments of EUR 3.9 mln.

Other investment items include the road access from Avenida de Astilleros to the commercial harbor and the improvement of the entrance to the quay Ciudad of the cruise terminal from la Plaza de Sevilla (EUR 550,000), civil works in the fishing and general cargo port of Santa Maria (EUR 800,000), pavement of a land plot adjacent to the railway tracks in Puerto Real, the bulk cargoes port (EUR 1.2 mln) and arrangement of a path access to the beach of Puntilla, a project currently under development near the Santa Maria port (about EUR 100,000).

The contract to build a the New Container Terminal was awarded in 2011 by the Cadiz Bay Port Authority to a 50-50 joint venture of the Spanish infrastructure corporations Acciona and FCC. The project’s budget is EUR 91 mln, of which EUR 60 mln are to be financed through a loan by the EU’s European Investment Bank. The first phase of the project comprises reclamation of a 22 hectares land plot, dredging of the access channel, construction of 590m of quays with a 16m draft and a 320m breakwater. The new terminal will replace the existing container terminal near the passenger terminal and the city centre and will serve to separate passenger and container traffic, increase capacity and improve accessibility by land and sea.