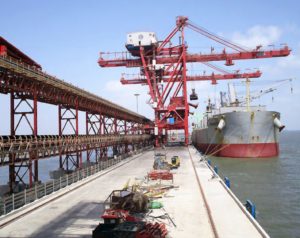 At the official ceremony, Prime Minister said that the state-of-the-art facility would facilitate cement and clinker exports.

Pakistan International Bulk Terminal (PIBT) was commissioned in early May this year and has successfully handled 12 coal ships since then. Its designed capacity is 12 mln tons of coal and 4 mln tons of cement and clinker per year, with an average discharge rate of over 30,000 tons per day. PIBT was set up primarily for handling and delivering coal to power plants and cement factories by rail, road and sea.

Pakistan’s first dedicated dirty bulk cargo facility was developed by Pakistan International Bulk Terminal Limited (PIBTL) under a 30-year built, operate and transfer (BOT) agreement with Port Qasim Authority. The company invested around USD 285 mln in this unique project, said PIBTL Chief Executive Officer, Sharique Siddiqui.
The development works included dredging down to 13m, constructing a quay of 460m capable of handling ships of up to 65,000 tons and a storage yard of 25 hecatres. The facility is equipped with two coal ship unloading cranes and one cement/clinker loading crane. At the yard, a dedicated mechanized truck loading station is arranged with a capacity of loading two trucks simultaneously at the rate of 100 tons/min. At the gate, there are 4 in lanes and 4 out lanes with 9 weigh bridges.

According to Sharique Siddiqui, the terminal operates more efficiently and reliably than the Karachi Port: unloading a coal cargo ship of similar tonnage currently takes around 5 days at KPT, whereas at PIBT it can be handled within 2 days due to the modern and mechanized handling system.

The terminal’s infrastructure allows not only reduce cargo handling time but also decrease wastage of coal and cement during the operations and their amalgamation with external particles while being stored.

PIBTL is a public limited company listed at Pakistan Stock Exchange and sponsored by the Marine Group of Companies, one of the largest cargo handling and logistics groups in Pakistan. The project was financed by the International Finance Corporation, the private sector arm of the World Bank Group, and the OPEC Fund for International Development, along with a syndicate of local Pakistani commercial and conventional banks.