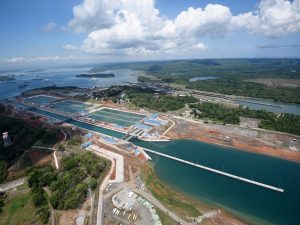 Almost 4 months passed since the Panama Canal was re-opened on June, 26th this year following its $5.25 billion widening. Now the new set of locks allows vessels of up to 14,000 TEUs (New Panamax type) to pass, compared with the previous limit of about 5,000 TEUs. However, now that shipping lines prefer sending larger but fewer vessels through the waterway, ship transits through the Canal are well below capacity.

“Less than a third of the 12 daily transit slots for container vessels are being taken up”, pointed out Matthias Dietrich, Hamburg-Sud’s vice-president for the Caribbean and Latin America West Coast region at TOC Americas conference in Cancun, Mexico. – “Bookings for the New Panamax vessels have been slow to come — last month, there were a few days which saw four vessel transits, but on most days it has been two or three transits,”

“MSC has halved the number of vessels transiting the canal to 9 per week since the widening, while the average ship size has risen to 6,400 TEUs from 4,600 TEUs”, said Hernan Salazar, West Coast South America planning manager, MSC.

The Panama Canal Authority said more than 165 New Panamax vessels have transited the new locks so far and it has received over 156 bookings for future sailings.

However, shipping experts believe it will be difficult for the Canal to boost traffic in the short term, as global container volume is expected to stay almost flat this year. According to Alphaliner, it will grow by just 0.3% in 2016.