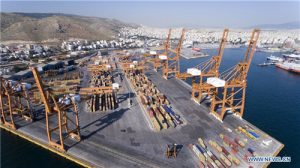 The European Anti-Fraud Office (OLAF) has confirmed it is working with Italy on the investigation into the suspected tax scams, but without giving further details.

However, Fabio Botto, a representative of the Italian Central Anti-fraud Office, commented: “The VAT is completely evaded, with enormous damage to the national tax authorities and to the community.”

According to Fabio Botto, his agency has evidence that Chinese-owned firms run by the criminal groups were fraudulently avoiding the charges on large shipments of goods through Piraeus. They import goods, often counterfeit clothing and footwear, and massively understate their value to EU customs to avoid import duties. They also give false details of the goods’ consignees, thus enabling them to avoid paying value-added taxes (VAT). This tax-avoiding schemes had cost Italy tens of millions of euros in unpaid VAT.

The newspaper quotes Fabio Botto as saying that Piraeus, Greece’s largest port, which is being developed as a trade gateway between China and Europe, has become a major new entry point for smuggled goods as northern ports tightened controls.

“We are investigating the new routes developing with the Belt and Road project. Currently the predominantly beaten path appears to be through Piraeus,” he said.

Greece’s Financial Crime Unit is also conducting its own independent investigation into a suspected tax fraud case involving Chinese goods imported via Piraeus. But the Greek unit was not informed about the wider investigation and has little contact with Italian and EU authorities.

Both Italian and Greek officials say that they have no evidence of any wrongdoing by the Piraeus Port Authority (PPA). In its turn, PPA said it had not received any information about criminal groups using the port and it would alert authorities if it did. The port takes all necessary measures to ensure that goods have customs control but it is “under no circumstances responsible for conducting checks for illegal activities”.

Cosco Shipping Ports, which acquired a 67% stake in PPA in August 2016, said in a statement: “The company has in its global operations consistently and strictly followed local and international laws, and persevered to operate legally and compliantly”.

In the meantime, Cosco Group faces concerns of the US regulators over its acquisition of Hong Kong’s Orient Overseas International Ltd (OOIL), the parent company of OOCL container line. In July 2017, Cosco Shipping Holdings and Shanghai International Port Group offered to buy all issued shares of OOIL for USD 6.3 bln. The transaction is expected to be completed by June 30, 2018, when COSCO will consolidate 90.1% of OOIL, becoming the world’s third-largest container carrier.

However, the US Committee on Foreign Investments (CFIUS) has not yet approved the deal due to the fact that OOIL’s US assets include the Long Beach Container Terminal (LBCT), which in the course of the transaction would become Cosco’s third Californian terminal.

As a possible solution, Cosco has reportedly proposed to divest LBCT in order to get the CFIUS approval for the takeover.