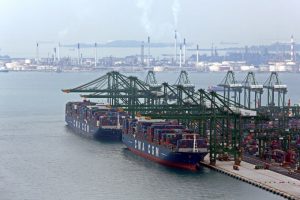 According to PSA, since the beginning of 2017 the terminal has achieved an average Gross Berth Productivity of over 160 moves per hour for mega vessels.

The official ceremony of CPLT Phase 2 launch was attended by Mr. François Hollande, President of the French Republic, and Mr. Khaw Boon Wan, Coordinating Minister for Infrastructure and Minister for Transport, Singapore.

Mr. Jean-Yves Duval, Senior Vice President Asia, CMA CGM Asia Regional Office said: “This is another exciting milestone for CMA CGM as part of the Group’s continuing efforts to make Singapore our main hub in the region, while reiterating the importance of Singapore to our global strategy.”

Mr. Ong Kim Pong, Regional CEO Southeast Asia, PSA International said: “PSA is deeply honoured by the trust that CMA CGM has placed on us to serve as their Asian hub for the long haul. We look forward to the opportunities this brings to support trade between the ever- growing economies of the Asia-Pacific region, and the world.”