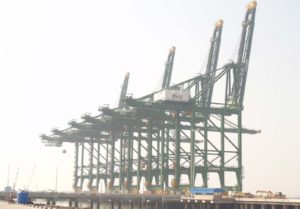 The USD 1.24 bln terminal is being constructed as a public-private partnership with Singapore’s port operator PSA International and is considered India’s biggest foreign direct investment in the port project.

As we wrote earlier, BMCT will become the fifth container terminal at JNPT, the biggest container port in India, handling annually about 55% of the country’s containerized cargo (around 4.5 mln TEU). PSA joins here other global terminal operators: APMT and DP World.

JNPT expects that with the commissioning of the Western Dedicated Freight Corridor (DFC) in 2019, establishing a rail connection between Mumbai and Delhi, the volume of export-import trade will double and the terminal will provide the capacity to handle these higher trade volumes.

According to PSA, BMCT’s rail facilities will be the largest in India and the only on-dock DFC-compliant facilities at JNPT, capable of handling 1.5km long, 360 TEU container trains.

The company already secures agreements with service providers to facilitate future operations. Thus, in mid-December 2017, BMCT announced the signing of a Memorandum of Understanding with Container Corporation of India (Concor) to launch dedicated container trains running between BMCT and Concor’s Rail Transhipment Hubs at Kathuwas and Jakhwada, which will operate as BMCT’s inland extended gateways for North and West India.