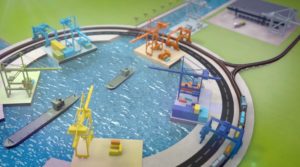 The Port of Rotterdam Authority announced the start of construction of the Container Exchange Route (CER) that is designed to link the deepsea container terminals, empty depots, rail terminals and distribution companies at Maasvlakte port area. The goal of this project is to reduce exchange costs between the various companies and further improve connections with the European hinterland.

Europe’s largest seaport and transshipment hub, Rotterdam has been searching for years for a solution to the problem of congestion at Maasvlakte barge terminals and at the busy A15 motorway. The sharply increased barge loading and unloading times that began last year with the shipping alliances restructuring, forced the Port Authority to accelerate the development of effective measures.

Following the extensive consultations with container terminal operators and other parties, the Port Authority launches a revolutionary project that would comprise the infrastructure construction, the purchase of terminal systems, the modification and implementation of IT systems. The estimated investment into the project is EUR 175 mln.

The Container Exchange Route will constitute a single dedicated network of container terminals, empty depots and warehouses with a shared IT technology, infrastructure and services to ensure the most efficient and cost-effective way to exchange containers between various locations. Containers would enter the CER through dedicated exchange points to be moved to different locations where they would be bundled and loaded onto other transport modalities, from where they continue their way to their destinations by sea, river, road or rail.

Ronald Paul, Chief Operating Officer at the Port Authority: “The CER offers the opportunity to combine container streams, which means that trains, inland vessels and feeder vessels no longer need to go to the different terminals. With the CER, the Port Authority is introducing a completely new, advanced and unique system. The CER will improve links between container terminals at Maasvlakte and reduce congestion, which will result in cost reductions and further improvements to the Port of Rotterdam’s competitive position as container hub.”

One part of the CER project is the construction of a concrete road, which involves about 11.5 km of new road up to the terminal sites, 3 road junctions, 1 level crossing and 3 rail viaducts. The Port Authority has award the contract for this construction to consortium KWS Infra B.V. & Van Hattum en Blankevoort B.V. The work will start this current year.

The CER is scheduled to be fully completed and operational by the end of 2020.