Rotterdam enters into agreements with Indonesia for port development 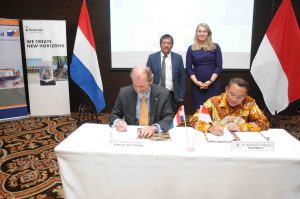 During the visit of Dutch Prime Minister Rutte to Indonesia, the Port of Rotterdam Authority signed two important agreements for port construction.

According to Port of Rotterdam’s press release of today, one is a joint venture agreement with the Indonesian state-owned port corporation Pelindo 1. The main purpose of this JV is to prepare the development of the port of Kuala Tanjung.

Kuala Tanjung is to be constructed near the port of Medan, the capital of North Sumatra, which is the most populated province outside of Java. The facility is strategically located on the Strait of Malacca. It is a key project in Indonesia’s National Ports Masterplan that involves building of 35 ports across the vast archipelago in the next five years to bring down high logistics costs and stimulate economic growth in the country.

That same day, the Port Authority also signed a memorandum of understanding (MoU) regarding the expansion of the port of Jakarta. This MoU was entered into by Pelindo 2 (the state-owned port corporation bearing responsibility for Jakarta, among other ports), JakPro (the land development company of the City District of Jakarta) and the Port of Rotterdam Authority. The three parties have agreed in this MoU to jointly direct and support a preparatory feasibility study for the future expansion of the port of Jakarta at the so-called O, P and Q islands.

The Port of Rotterdam Authority opened an office in Jakarta earlier this year with the aim of coordination of projects in the country. Allard Castelein, CEO of the Port of Rotterdam Authority signed both agreements and commented: “With the signing of two agreements, the delegation’s visit can be considered a resounding success for the Port Authority. The agreements are a major step forward for our activities here in Indonesia. They reflect the Indonesian government’s confidence in our efforts”.