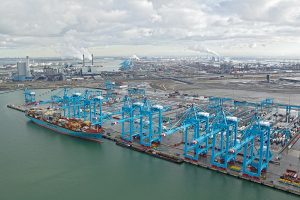 The port of Rotterdam has published its 9 months results this week, recording a 10.1% increase in container traffic compared to January-September 2016. In the first 9 months of 2017 the port handled 10.2 mln TEU, or 105.9 mln tonnes. The growth was attributed to the strong increase in the number of full containers, which is reflected in the fact that in tonnes the increase was even higher, 11.7%.

The port explains the surge in container volumes by a number of factors. Apart from the steady economic growth in Europe, these include increased productivity and throughput volumes at the Maasvlakte 2 terminals, Rotterdam’s favourable position within the new sailing schedules of the major alliances and the port’s strengthened appeal as a transhipment hub in connection with increased vessel sizes and feeder options to/from other European ports.

Allard Castelein, CEO of the Port of Rotterdam Authority, noted: “Thanks in part to the 10% increase in container throughput volumes, this has proven a fine quarter for our port statistics.”

The total container traffic growth in 2017 is forecasted by Alphaliner at 6%.