Russia to build a new deep-sea port in the north

The project of a new deep-water region of the Arkhangelsk port in the north of Russia was presented to the state-run Vnesheconombank (Bank for Development and Foreign Economic Affairs, or VEB) as one of the projects competing for federal funding, informs PortNews agency.

The project includes construction of a modern transport hub consisting of four multi-purpose and two dedicated terminals for mineral fertilizers and LNG, with a total annual capacity of up to 38 mln tonnes by 2035, as well as road and rail connections. Dredging works would provide the access channel of 17m depth and allow the new port accommodate Panamax vessels of 14.5m draft and up to 74,300 DWT. 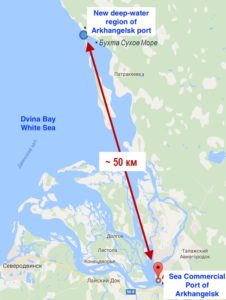 The new facility is to be built on the eastern coast of the Dvina Bay of the White Sea, 50 kilometers north of the existing Sea Commercial Port of Arkhangelsk and is considered as a potential outpost of the Northern Sea Route infrastructure. Besides, it will be part of the new Belkomur railway link that will connect the mining and industrial areas in the Urals and Siberia with the maritime routes. The developer estimates the potential traffic at 25 to 46 mln tonnes per year, that would include the cargoes coming via Belkomur and from the north-western region of Russia, as well as those gained from the Baltic ports of Tallinn and Riga. According to the R&D company Morstroytechnology LLC, the realization of the ambitious railway projects alone may attract 9 mln tonnes of potash fertilizers and up to 10.2 mln tonnes of oil and gas.

The project’s cost is RUB 149.8 bln (USD 2.3 bln). The developer seeks strategic investors for the construction of the specialized terminals. China may apparently be among them.

In October 2016, an agreement of intent was signed with the Beijing-based Poly International Holding Company. Last April, at the Arctic Forum conference in Arkhangelsk, Poly Group presented its investment plans for the new port and the railway committed USD 5.5 bln to the project.

Meanwhile, the throughput of the existing port of Arkhangelsk is far less than that of another northern port of Russia – Murmansk. Thus, in the first 5 months of 2018 the volume of Arkhangelsk was 1,2 mln tonnes (+25.7% y-o-y), whereas Murmansk handled 21.8 mln tonnes (+3.5% y-o-y).