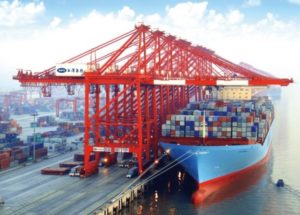 The main examples of the revealed unfair practices include inducing the shipping companies to use tugboats, tallyings, shipping agents and other services provided by the ports’ own subsidiaries, thus dividing the market between the selected companies. Secondly, some ports charge higher handling fees for loading/unloading operations with local foreign trade containers than with international transit containers. Thirdly, many ports, taking advantage of their dominance in the relevant markets, impose mandatory services, unreasonable terms, loyalty provisions and other unfair trading conditions into the contracts with shipping lines.

Now the ports are ordered to open fully the market of tugging, tallying and shipping agency services as well as immediately abolish unfair contract terms.

Following this news, Moody’s Investors Service has commented that the announced reduction of the handling tariff for import and export containers is credit negative for Shanghai International Port (Group) Co. Ltd., as it will negatively impact the Group’s profitability and cash flow generation from 2018 onwards. Moody’s estimates the fall in the Group’s container handling revenue by CNY 1-1.5 bln (up to USD 226 mln) in 2018, resulting in a lower gross profit margin of 52%-53% for this business segment when compared with the 57% achieved in January-June 2017. However, this will not have an immediate effect on SIPG’s A1 issuer rating, the ratings outlook currently remains stable, notes Moody’s.

Shanghai International Port Group is the dominant player in the port of Shanghai, which is in turn the largest container port globally by throughput volume. The company handled 29.9 mln TEU in the first 9 months 2017.