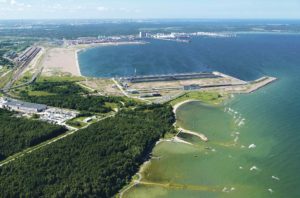 The Port of Tallinn (AS Tallinna Sadam) has announced an auction for the equipment of the coal terminal located on two land plots in Muuga Harbour. The equipment is listed in the Annex to the Notice of Auction and includes a stacker, a reclaimer, railway tracks for these, a ship loader, band conveyors and wagons unloading station, among others, all assets purchased by AS Coal Terminal in 2004-2011.

All these constitute one single object of the auction, the equipment being sold as a whole. Its starting price is EUR 3.8 mln.

In order to assess the exact composition, condition and works necessary to dismantle the equipment, tenderers have the right to examine the objects in the location of the coal terminal.

According to the auction documentation, upon acquiring the equipment in the course of auction, the tenderer shall organise its dismantling and removal, as well as utilisation of the waste generated, on his own expense. The removal of the object must be completed latest by 28 February 2019.

The tender bids are to be submitted by 01 August not later than 11 am.

In December 2017, AS Tallinna Sadam initiated a tender for a license to develop a coal terminal in Muuga Harbour with a starting price of EUR 4.5 mln. The deadline for submitting bids was 5 January 2018. As no offers came to the tender, the port authority is currently searching for alternatives.

According to local sources, the company AS Coal Terminal, which operated the port’s coal facility based on the long-term agreement with AS Tallinna Sadam, went bankrupt in 2017. The terminal has been hugely underutilized in recent years, paying penalties to the port for not reaching the committed volumes.

The Port of Tallinn has recently run its Initial Public Offering (IPO) on the Nasdaq Tallinn Stock Exchange. From 25 May to 6 June, Estonian retail investors and Estonian and international institutional investors were able to subscribe for shares in the company with the price range from EUR 1.40 to EUR 1.80 per share. The successful listing raised EUR 147 mln, which became one of the largest in the Baltic States in recent years. In the course of the IPO, where the government of Estonia, the port’s majority shareholder, sold a shareholding of approximately 33%, the European Bank for Reconstruction and Development (EBRD) has acquired a 3.6% stake.