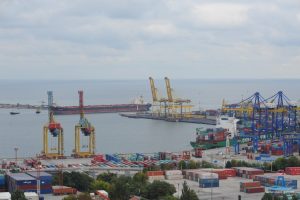 Ukrainian Sea Ports Authority (USPA) jointly with the American Chamber of Commerce in Ukraine will hold “Port Infrastructure Development Day” on 4 April 2017, where it intends to present a number of projects on construction and renovation of seaports infrastructure facilities to foreign and national engineering and construction companies, reports USPA press service.

The key projects to be presented include the development of berth facilities in the ports of Odessa, Chernomorsk, Yuzhny and Mariupol.

«We have a short-term plan of seaport engineering infrastructure development and we are ready to present it to potential contractors, as well as to discuss it and receive constructive proposals», said Raivis Veckagans, CEO of USPA.

According to estimates of USPA experts, over 80% of berths require minor or capital repairs, 20% of which need emergency repairs. The total cost of works was evaluated at about UAH 5 bln (EUR 170 mln).

The event will also be attended by representatives of European Bank of Reconstruction and Development, European Investment Bank, Ukraine’s Ministry of Infrastructure and Ministry of Regional Development.

Raivis Veckagans, a Latvian professional with extensive experience in container terminals and logistics management, was appointed the Acting CEO of USPA in January 2017, with the aim to reform the organization and carry out anti-corruption measures in the ports sector of Ukraine. Mr. Veckagans has actively started its mission. In February, USPA held “Ukrainian Dredging Day” for leading dredging companies, where presented the prospective projects scheduled for 2017 and the updated tender guidelines.

Earlier in March, Raivis Veckagans has introduced USPA Strategy for 2017: «Modernization and development of port infrastructure, attracting investments, improvement of industry legislation and measures to ensure equal conditions for doing business in seaports are among our main objectives for the current year».

He has added that currently USPA focuses on 12 key infrastructure initiatives, including the development projects in the ports of Yuzhny and Odessa. Among other projects for 2017 are dredging of the access channel and the harbour basin down to 16 m in the port of Chernomorsk and a similar dredging project in the port of Mariupol.