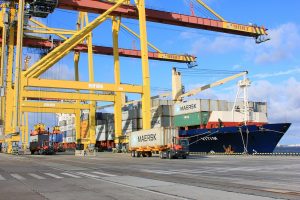 ULCT is the first deep-water container terminal in North West Russia built outside city limits in line with all requirements for modern container facilities. Its current throughput capacity is 440,000 TEU, at full development it will be 2.6 mln TEU with depth alongside 16 m. The terminal is located 100 km west off St. Petersburg in the port of Ust Luga. The project is realized by the Global Ports group (80%) and Eurogate (20%), a leading European container terminal operator.