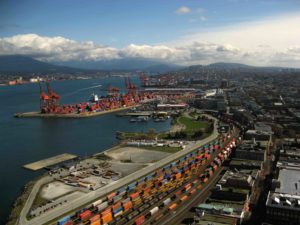 The Port of Vancouver has announced the allocation of CAD 167 mln (USD 125 mln) by the federal government for three projects aimed to improve the port’s rail infrastructure and reduce traffic congestion.

Combined with CAD 55.8 mln (USD 42 mln) announced last month for four other critical infrastructure projects in the region, this brings the total funding to over CAD 200 mln, that comes through the National Trade Corridors Fund. This fund is part of Transport Canada’s Transportation 2030, a strategic vision to support a safe, secure, green, innovative and integrated transportation system of the country and its competitive position in international trade.

The first two projects, which are led by the Vancouver Fraser Port Authority, with investment from Canadian National Railway (CN Railway) and Canadian Pacific Railway (CP Railway), include, among others, building 9.4 km of new siding track within the CP Railway corridor in Vancouver and Burnaby, extending the existing two-lane Waterfront Road by 600m, and improving the existing Thornton Rail Tunnel ventilation system so that trains can pass through the tunnel more frequently.

The third project led by CN Railway, with investment from the Vancouver Fraser Port Authority, involves designing and building a 4.2km-long secondary track, parallel to the existing Burrard Inlet line, in the City of Vancouver.

The investment in infrastructure announced by the federal government over the last month will provide national, provincial, regional, and local benefits, alleviation of transportation bottlenecks among them. The increased rail capacity will support the flow of goods, such as grain, through the south shore port area, as trade volumes continue to grow.

In 2017, the port of Vancouver handled 142 mln tonnes, a 4.8% increase from 2016, setting a new annual cargo throughput record. Container volumes grew by 11%, up to 3.3 mln TEU, driven by strong North American economic growth and strength in the trans-Pacific container market. This year, the port expects to meet the 3.6% annual growth that is set by its 5-year forecast.

The Port of Vancouver is Canada’s largest, and the third largest in North America by volume, facilitating trade between Canada and more than 170 world economies. It is a critical link to Asia, most notably with China, South Korea and Japan. The United States is also among its principal trading partners.