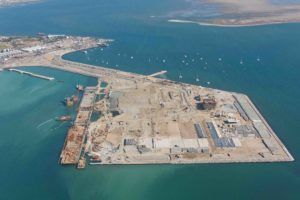 The construction of the new container terminal at the Walvis Bay port in Namibia is 85% finalized with the full completion scheduled for June 2019, says the statement of African Development Bank Group. Supported by a loan of ZAR 2,982 mln (about USD 300 mln) from the African Development Bank, which accounts for 87.6 % of the total costs, the Port of Walvis Bay’s new container terminal is expected to increase the port’s container handling capacity from the current 355,000 TEU up to 1,005,000 TEU.

Strategically located on Africa’s south-western coast, the modernized and larger port will mean easier and much faster transit between Africa, Europe, Asia, and the Americas. The expansion of Walvis Bay is expected to benefit not only Namibia, but also to cater for the whole SADC region, particularly Angola, South Africa, Democratic Republic of the Congo, and the land locked countries of Botswana, Zambia and Zimbabwe.

According to Namibian Port Authority (Namport), the operator of the Port of Walvis Bay, the expansion project consists of dredging and reclamation of 40 hectares of land offshore, where a modern container terminal will be built. It will be linked to the existing port by a 106m wide solid access causeway also to be reclaimed. The New Container Terminal will add a new 600m quay wall to the existing 1,800m berth line and will be able to accommodate two container vessels of 8,000 TEU at once. It will be connected to the existing port’s road and rail network, utilities networks as well as communication systems.

The port’s existing container terminal will be transformed into a multi-purpose terminal.

The project works are carried out by the Chinese companies. First of all, it is China Harbour Engineering Company, with whom Namport placed an engineering, procurement and construction contract inNovember 2013, and in May 2014 the company started the expansion works.CCCC Guangzhou Dredging provided the trailing suction hopper dredger to conduct dredging works at the port.

Four new STS cranes for the terminal were provided by Zhenhua Port Machinery Company (ZPMC) and were delivered in February 2018. Namport expects that these cranes will double the handling capacity from the current 15 containers per hour to about 30 to 40 containers per hour.