WISTA: bringing together women in shipping 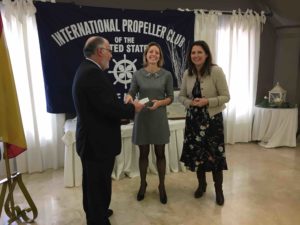 On 21 February 2018 the Propeller Club of Algeciras held its regular lunch meeting (“almuerzo coloquio”), where Laura Ferrario Barber from the Women’s International Shipping and Trading Association (WISTA) was invited as a speaker. Mrs. Ferrario, Tramp Operations Manager at Transcoma Shipping in Tarragona, used to be the President of the Spanish National WISTA Association. She told the Club members and those invited about the Association, its history and mission.

WISTA was formed in 1974 as a global organisation connecting female executives and decision makers around the world. It started with a Christmas lunch in London UK, over which 6 women brokers met. The ladies came from Germany, The Netherlands and the UK, all of them were involved in the tanker market. A few years later, in 1981, the first “Ladies in Shipping” conference took place in Hamburg. However, it was not until 1984 when the name Women’s International Shipping & Trading Association, or shortly WISTA, was accepted at the conference in Stockholm.

Today, WISTA unites over 3,000 female professionals from all sectors of the maritime industry in more than 40 countries. The Association facilitates networking, exchange of information and experiences among its members, promotes business and skill building opportunities.

WISTA Spain has been operating for 11 years connecting 60 active members, gathering regularly at their annual meetings, where male colleagues are always welcome to take part.

After the speech of Laura Ferrario, the Propeller Club participants discussed women’s role in the modern shipping world and problems encountered by women in the course of their work life, such as maternity leave conditions in various countries and limitations that childbirth imposes on a woman’s career, to name a few. However, it has been recognized by the majority of the present women that they have not experienced any particular signs of “machismo” in their working environments; on the contrary, shipping men often show more respect and care for their women colleagues, as they are much less numerous in the industry.