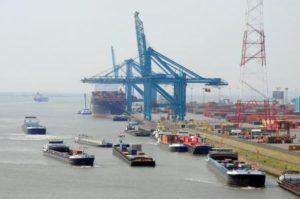 The parties involved in container barge transport in the port of Antwerp signed yesterday a roadmap of structural measures to make this type of transportation more efficient and further develop it, the Antwerp Port Authority press service informs. The implementation plan includes concrete initiatives and structural solutions to allow for sustainable growth of the port and of barge shipping in particular.

Nearly 40% of inland transportation to and from the port of Antwerp is done by barges, and the port aims to raise this share up to 43% by 2020. However, in the second quarter of 2017, the rapidly growing freight volumes, shortages of dock labour and the ever larger sizes of ocean vessels calling at the port led to peak load on the terminals, with longer waiting times for container barges as a result. The port struggled to resolve the barge congestion. With the support of the terminals, together with the barge operators, shipping companies, shippers, forwarders, NxtPort, CEPA, the Flemish Government, Flemish Waterways, Alfaport-Voka (Chamber of Commerce) and Antwerp Port Authority, a declaration of intent was signed on 6 July 2017 to promote container barge transport in the port. This signing was followed by 40 meetings of workgroups aimed at elaborating a concrete plan of action, which was unveiled yesterday.

The agreements concentrate on three main areas: planning and collaboration; consolidation and digitisation. The following actions are envisaged:

Additionally, other measures for more efficient operation will be examined in the short and medium term. For instance, the terminals will consider a possibility to have dedicated barge capacities. Thus, Antwerp Gateway is to start a new construction project in the summer of 2018.

In order to deal with dock labour shortages, CEPA will make additional efforts to reduce training times for dock workers.

The Port of Antwerp believes the combination of all these measures should give new impetus to container barge transport in the port, and the intensified collaboration between the parties should lead to a greater reliability and efficiency of barge handling.

Antwerp is the second largest port in Europe, just following Rotterdam. The barge congestion also concerns the port of Rotterdam, where this type of transportation accounts for 45% of the hinterland traffic. Earlier we wrote about the Container Exchange Route, a solution planned by Rotterdam to improve its inland connections.