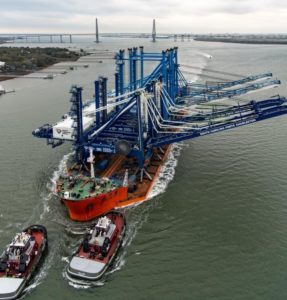 Two new ship-to-shore cranes were delivered to the Wando Welch Terminal in Charleston on 1 March 2018, the South Carolina Ports Authority (SCPA) informs. The neo-Panamax STS cranes are manufactured by Shanghai Zhenhua Heavy Industry Co., Ltd. (ZPMC) in China and can lift containers 155 feet (47m) above the dock. Upon commissioning in June, the new cranes will be employed for handling neo-Panamax vessels with capacity of up to 14,000 TEU.

Arrival of the cranes marks the final stage of a USD 48.4 mln project to strengthen and upgrade the terminal for handling larger vessels.

The Wando Welch Terminal, SCPA’s busiest container facility, received its first two neo-Panamax cranes in August 2016 and an additional crane is on order for delivery in August 2019. In addition to the new cranes, SCPA is raising four existing cranes from 115 feet lift height to 155 feet. Ultimately, the Wando Terminal’s fleet of 13 cranes will include 9 neo-Panamax ones by the fall of 2019.

The cranes delivery had happened just a day before the Charleston Harbor Deepening Project was launched. The USD 529 mln project was officially kicked off last Friday. The celebration ceremony was organized by SCPA aboard the historic U.S.S. Yorktown, which is today the Patriots Point Naval and Maritime Museum. The dredging from 45ft to 52ft (15.8m), to be completed in 2020, will provide the port of Charleston with the deepest navigation channel on the East Coast.

Presently, SCPA handles 20 of 27 weekly calls of vessels too large to transit the Panama Canal before its expansion. Beginning in April, two weekly services will consist of vessels 13,000 TEU or more.

Earlier we wrote about COSCO Development, the 13,092 TEU capacity vessel, which called Charleston last May, becoming the largest containership ever calling the US East Coast ports.