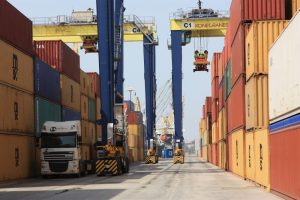 FAS has admitted that the container handling tariff rates of CTSP are economically justified and their growth happened due to a sharp rise of US dollar exchange rate, as the terminal’s commercial policy was based on that currency.

In its turn, CTSP has presented a roadmap of the process of changing its tariff to be denominated in Russian ruble and has committed to increase the share of ruble transactions in the company’s earnings by the end of 2018.

In the framework of the settlement agreement, FAS accepted CTSP’s activity as destined to provide a fair competition within the Big Port of St. Petersburg.

As we wrote a year ago, several large terminal operators in Russia were accused by FAS of abusing their monopoly power and charging excessive container handling rates. Many of them were fined. Thus, the located in the port of St. Petersburg First Container Terminal was fined RUR 4.17 bln (USD 69.5 mln) and Petrolesport – RUR 1.27 bln (USD 21.2 mln). Later, in December 2017, the Moscow Arbitration Court approved the settlement agreement between FAS and these stevedoring companies (both of them are part of Global Ports), on condition that the terminals would convert their handling rates into rubles.

However, the fine for UCL Holding’s CTSP was not yet determined at that time. Only recently, on 31 May 2018, FAS announced it – Russia’s largest container terminal has to pay RUR 91.2 mln (USD 1.5 mln) into the federal budget. UCL Holding strongly disagreed with the FAS decision, stressing that CTSP is not dominating the container stevedoring market, on the contrary it operates in the highly competitive environment.

Indeed, the FAS arguments look weird in the current situation on the Russian container handling market. The three largest and well-equipped container terminals in the port of St.Petersburg have a total capacity of 3 mln TEU: First Container Terminal (1.25 mln TEU), Petrolesport (1 mln TEU) and Container Terminal Saint-Petersburg (750,000 TEU). In 2017, collectively, they handled 1.4 mln TEU, which makes up just 46.7% of their joint capacity.

Obviously, all these charges and fines of FAS were aimed solely on stimulating Russian terminal operators to change their tariffs into rubles, as was ordered by President Vladimir Putin. On 14 June 2018, the Russian parliament (the State Duma) adopted the draft law obliging the Russian ports denominate their service rates in Russian rubles.