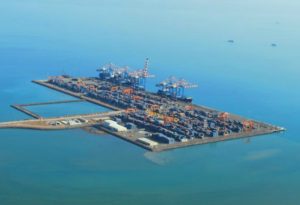 Djibouti dismissed the speculations that appeared last week about the reasons behind the government’s expropriation of Doraleh Container Terminal (DCT) from DP World, informs Africa Times. In his statement in Twitter on Friday, Mohamed Siad Doaleh, Djibouti’s ambassador to the United States, claimed as “false” the idea that Djibouti would give the disputed Doraleh terminal to China. “Nothing could be farther from our intentions,” Doaleh said, mentioning the recently signed agreement with the Singaporean shipping company Pacific International Lines (PIL) as a proof of the Republic’s strategic wish to preserve and develop container terminal activities at DCT.

On 5 March 2018, DCT signed an agreement with PIL, with which Djibouti intends to draw additional 300,000 TEU per year and demonstrate “the renewed confidence of operators” and its own willingness to diversify the terminal’s partners.

In its press release issued on Friday, 9 March, the Republic of Djibouti blamed DP World of “aberrant restrictions”, that the port operator imposed on the activity of DCT. Although the terminal was designed with the capacity of 1.6 mln TEU per year, DP World allegedly “wanted to limit it to import-export traffic to the local market and to Ethiopia, whose cumulative volume of annual activities represents about 800,000 containers/year”, says the press release.

To take over the activities of DCT, the Societe de Gestion du Terminal a Conteneurs de Doraleh (SGTD) was created. A public company with the State of Djibouti as the sole shareholder, its primary purpose will be to defend the sovereign interests of the nation. It will be responsible for promoting the terminal’s activities with a world-class standard of service with the aim to develop it into a major transshipment hub in the Red Sea.

Earlier last week, there appeared reports that Djibouti seized control over the Doraleh Container Terminal in order to give it to China as a gift or as a debt pay-off. This may not be so improbable, bearing in mind that Djibouti relies heavily on the Chinese investment. Up to now, China has provided the country with over USD 1.4 bln in infrastructure funding, most of it in the form of loans from the Export-Import Bank of China.

Besides, China Merchants Port Holdings Co. Ltd. already holds 23.5% of Port of Djibouti S.A. (PDSA), the parent company of DCT, where PDSA owned 66.66%. DP World possessed the remaining 33% stake. The other shareholder of PDSA is the Djibouti government (76.5%).

These speculations gave rise to hot debates between the US, Djibouti and China about the growing Chinese influence in this strategic African region.