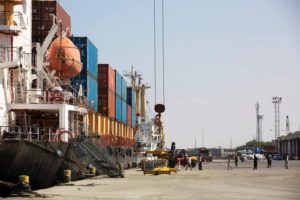 Following DP World’s announcement of the Djibouti Government illegally taking control of Doraleh Container Terminal S.A at the end of February, more news is coming from the region. On 1 March 2018, the Dubai-based global terminal operator signed an agreement with the Government of Ethiopia, whereby Ethiopia enters into DP World Berbera Port becoming its strategic shareholder.  According to the agreement, Ethiopian government acquires a 19% stake in the project, whereas the Somaliland Port Authority will hold 30% and DP World retains the 51% stake.

The agreement also involves Ethiopia’s investment in infrastructure to develop the Berbera Corridor as a trade gateway for the inland country, which is one of the fastest growing countries in the world.

DP World’s plans at the Port of Berbera include the construction of an additional berth, in line with the Berbera master plan, and the delivery of additional new equipment to further improve efficiencies and productivity. The first cranes are scheduled to arrive later this year.

Besides, the global port operator plans to develop a 12 sq.km greenfield economic free zone next to the Port of Berbera to complement the port’s growth as a regional trading hub. The final agreement on the project was signed yesterday between DP World and Republic of Somaliland in Dubai. The work on Phase 1 of Berbera Free Zone project will start this year.

Signing the agreement, DP World Group Chairman and CEO Sultan Ahmed Bin Sulayem expressed the importance of working with the governments of Somaliland and Ethiopia on the projects which will fuel trade and employment opportunities in the region and said: “Ethiopia is home to approximately 110 million people. The ports of Berbera and Doraleh will provide significant capacity to the region. Both these ports and more capacity will be needed to serve the region’s growth potential in the future.”

He also added: ”The economies of the region are growing at a pace that needs the development of Berbera supplementing Djibouti and additional gateways in the future.”

As we wrote earlier, DP World informed about the expropriation of Doraleh port on 23 February, which the company claimed illegal, and commenced arbitration proceedings at the London Court of International Arbitration to seek compensation. No further news came on the issue up to now.