India develops its own Silk Road 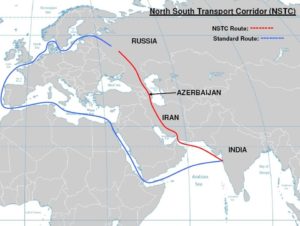 The Container Supply Chain Conference within TOC Europe 2017 held in Amsterdam this week has brought up the question of the impact of China’s concept of One Belt One Road on future container trade and infrastructure projects in Eurasia. Hercules Haralambides, professor of Maritime Economics and Logistics at Erasmus University Rotterdam, presented a holistic overview of the Chinese initiative highlighting its strategic port projects along its Maritime Silk Road in the ports of Kyauk Pyu (Myanmar), Colombo (Sri Lanka), Gwadar (Pakistan), Djibouti, Port Said (Egypt) as well as the recent acquisitions of Greek Piraeus Port and Spain’s major port operator Noatum by China’s giant COSCO Shipping Ports Ltd. With these, China is set to control the entry to and exit of the Red Sea and looks at the Mediterranean Sea as “hub of hubs” serving Europe, Africa and the Americas.

However, along with China’s initiative, India also has its own strategic plans and develops the North-South Transport Corridor (NSTC) to connect the country with Iran, the Caucasus, Central Asia and Russia. This continent-crossing plan is a multimodal trade corridor of 7,200 km long, linking the Indian Ocean and Persian Gulf to the Caspian Sea. Cargo will be shipped from Nhava Sheva and Kandla ports in western India to the Iranian ports of Bandar Abbas and Chabahar, a new Indian project, where it will develop and operate a container terminal, thereafter cargo will go north by road and rail through Baku to Moscow and St. Petersburg. This corridor will provide savings of 30% in cost and 40% in time.

The NSTC is seen as a driver for the trade in the rapidly integrating and developing region. According to Forbes, the volume of Indian exports to Russia in 2015 was USD 1.6 bln, too low bearing in mind the size of the economies involved. This might be a result of underdeveloped regional logistics, as shipping goods between the two countries today requires a 45-day journey by sea through the Arabian Sea, Suez Canal, Mediterranean Sea, North Sea, and Baltic Sea. The NSTC is meant to become an alternative for this.

The idea of the NSTC started materializing in 2002, when Russia, India and Iran signed an agreement to make it a reality. Now India is investing in various infrastructure projects. Apart from above mentioned Iran’s Chabahar port, the nation is also constructing the 500- kilometer rail link between Chabahar and Zahedan to connect the port to the rest of the Iranian railway network and supporting a 218-kilometer road connecting the heart of Afghanistan with a border to Iran.