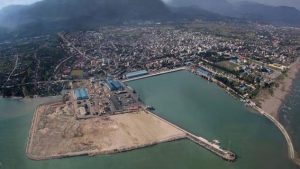 Iran has recently proposed to India to manage Phase 1 of its port of Chabahar, informs India’s The Economic Times. This confirms India’s presence in this strategic gateway to landlocked Afghanistan and other Central Asian markets.

Located on the southeastern tip of Iran, Chabahar is the country’s only oceanic port. As it lies outside the Persian Gulf, on the Gulf of Oman, it is easily accessed from India’s western coast, bypassing Pakistan. At present, Pakistan does not allow India to transport goods through its territory to Afghanistan, although it has recently allowed some Afghan shipments to come to India.

Last May India and Iran signed the Memorandum of Understanding stating that India is to develop and operate a container terminal in this small multipurpose port. At its Phase 1 the facility will have two container berths 640m long and 16m deep and 195 ha of land. The 30,000 TEU terminal is expected to be completed by next year.

The MoU implies Indian capital investment of USD 85.21 mln in the construction and a 10-year lease. Upon completion of the 10-year period, ownership of equipment will be transferred to Iranian side or kept by India for an extended period, based on mutual agreement.

India Ports Global Pvt. Ltd., a joint venture between Indian state-owned Jawaharlal Nehru Port Trust (60%) and Kandla Port Trust (40%), have been mandated to drive India’s investments in overseas ports. It is expected to set up a company in Iran to develop and operate Chabahar terminal. In mid-March, India Ports Global initiated a bidding process for the strategic partnership. Among those interested are Adani Ports and Special Economic Zone, operator of Mundra, India’s largest container port, and Essar Ports, the country’s second-largest private port and terminal company. J.M. Baxi Group, known in India for its chartering, broking and other shipping services, has also shown interest.

The two countries are also negotiating terms and conditions of Chabahar Phase 2 expansion, where the Indian government plans to invest USD 235 mln, of which USD 150 mln by Line of Credit from India’s EXIM Bank, as approved by the cabinet in February.

However, port management project is not the only development in Chabahar. The port complex also includes a Special Economic Zone, where Indian companies are invited to set up various production plants.  State-owned NALCO has already expressed its plans to set up an aluminum smelter there.

India is also constructing the 500-km rail link between Chabahar and Zahedan to connect the port to the rest of the Iranian railway network.

The development of Chabahar is regarded as a counterbalance to growing China’s influence in the region and in particular, its progress at Pakistan’s Gwadar Port, where state-owned China Overseas Port Holding Company was granted a 40-year lease in April.