Major changes in Buenos Aires to pull out some operators 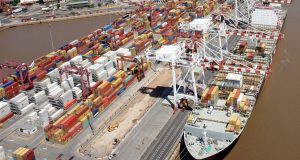 The port of Buenos Aires is undergoing a number of major changes in its layout and makes a list of potential bidders who will compete in the tender for two container terminals, which is scheduled for the beginning months of 2017, writes Port Strategy, citing Latin America news agency Marco Trade News. The two terminals will replace three existing container terminals.

“Terminal 1 will require investment of USD 350 mln and terminal 2 will need USD 500 mln,” – said CEO of the General Administration of Ports (Administración General de Puertos, AGP) Gonzalo Mórtola. – “We signed agreements with the ports of Rotterdam and Barcelona to validate the new design of the port.”

Currently the port of Buenos Aires hosts three container terminals located in Puerto Nuevo: Terminales Rio de la Plata operated by DP World at Terminals 1,2 and 3; Terminal 4 by APMT and BACTSSA in Terminal 5 by Hutchison Port Holdings. All of them have their concessions expiring in 2019. In November, we wrote that Dubai’s Economy Minister Sultan Bin Saeed Almansoori had officially requested Argentinian vice president Gabriela Michetti to renew DP World’s concessions, as it became known that Mauricio Macri, the president of Argentina, wanted to bring the renewal date from 2019 to 2017, as a means of driving investment.

At the moment it is unknown which of the operators will be pushed out of the port, nor how the terminals’ layouts will change. But we will continue monitoring the situation in Buenos Aires.