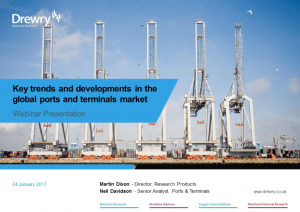 Last week Drewry held a webinar called “Key trends and developments in the global ports and terminals market” presented by Neil Davison, Drewry’s Senior Analyst, Ports and Terminals. At the webinar Mr. Davidson introduced a new “Ports & Terminals Insight” report which is intended to be issued quarterly and to become complementary to Drewry’s annual terminal operators report. It will provide a detailed and frequent analysis covering five key areas: thought leadership, port call patterns & liner connectivity, latest throughput trends with reasons for ups and downs, new port projects and financials from quoted stock market port companies. The webinar presentation touched upon all these five topics, with the material based on the data of 3Q2016.

The thought leadership part was dedicated to the fragmentation of a port’s capacity and its operational pros and cons. Drewry has analyzed 120 ports worldwide assessing the size and number of container terminals in each port and has found that in a small or medium port a single terminal offers the highest operational flexibility and allows all traffic to be accommodated in one place. And on the contrary, the ports with more fragmented capacity are facing the biggest challenge. For instance, Japanese ports Tokyo, Osaka, Kobe have medium throughput of 2.5-5 mln TEU per year and a high number of terminals: 29 across the 3 ports. Major US ports – Los Angeles, Long Beach, New York – are larger, with annual volumes of 5-9 mln TEU, but have 6 terminals in each port on average. Buenos Aires (1.5 mln TEU average annual throughput) operates 4 container terminals. The multiple terminals in such ports make it hard to accommodate carrier or alliance volumes without fragmenting them, adding to operational complexity.

On the other hand, large ports, like Ningbo, Busan, with volumes over 17 mln TEU and 8 and 9 terminals respectively, can operate effectively with a significant degree of capacity fragmentation, as each terminal is still large, but high level of inter-terminal transfers may be an issue, like in Busan. And on the contrary, one large terminal in a big port suffers diseconomies in terms of long distances travelled by landside equipment.

At the same time, Drewry highlights that this is only operational assessment in order to cope with bigger ships and alliances, not considering internal competition between the terminals within a port, and stresses a need for a suitable balance to be found between the operational advantages versus the perceived and actual regulatory concerns over the competition rules.

Answering the question about the possible solutions to overcome the fragmented capacity, Neil Davidson suggested a greater co-operation between the terminals. For instance, the adjoining terminals can share berths and equipment. The further apart terminals may create a kind of virtual terminals that work together, again sharing assets but doing that at a distance. However, commercial issues between the terminal operators are much more difficult to co-ordinate. Unlike the liner alliances, where vessels are pretty similar, terminals are usually different: berth length, depth, nature of cranes, service levels vary. Therefore, although there are ways to co-operate, the co-ordination is complicated, have numerous challenges, and ultimately the most effective way in the long-term is to have the terminal operators come together through an M&A and consolidate terminals, both physically and in terms of ownership.

The next area covered by the report is port call patterns, where Drewry selects a trade route with the most significant changes in service patterns and vessel deployments in the reported quarter. This time it was east-west services calling at North European ports, where a 10% fall in the number of weekly liner services was noted in 3Q2016 as compared to 3Q2015. The most significant changes were in Rotterdam (lost 6 services), Le Havre (lost 4 services) and Zeebrugge which lost all deep-sea east-west services that prompted the closure of 3 terminals, leaving only one open. Obviously, it’s a reflection of the ongoing trend: the deployment of bigger ships means that frequency of a service has to reduce as a result. In east-west services average vessel sizes increased by 4%, and the alliances have used the reduction in number of loops as part of an effort to reduce overall ship capacity.

As a measure for ports to secure volumes, Neil Davidson marks joint ventures between terminal operators and shipping lines, quoting as an example Rotterdam’s Euromax terminal where Cosco Shipping purchased a 35% stake last year, after the port had lost partially its market share to Antwerp over the last couple of years. However, he warns that this may also be challenging, as individual lines may be part of an alliance and therefore, have to be in agreement with the alliance as to what ports or terminals to call.

The report also includes a quick overview of greenfield terminals (Enayam in South India and 3rd container terminal in Algeciras) that have thanshipment as their primary target market. Drewry remarks a strong competition that the projects may face from the incumbent ports (Colombo for Enayam) and from other strong players (APMT in Algeciras, Eurogate in Tanger Med and China Merchants in Colombo).

On the financial performance, which is analyzed for 11 listed port companies covered by Drewry Financial Research Services Ltd., there has been revealed a lowering profitability on slackening growth. In these conditions, stricter cost rationalization and financial risk reduction are needed to retain interests from the investment sector.

The best performer in 3Q2016 was Global Ports Investments (28% gain in share price) due to the recovery of Russian volumes, although from a low base. The worst performer was ICTSI (-17% slip from its 52-week high), affected by the emerging country currency weaknesses, partially offset by new projects (Iraq) and tariff adjustments. Hutchison Port and Cosco Shipping Ports – about 7.5% down in 3Q2016, DP World -12.5% down.