Day ONE. New shipping group starts its operations as planned 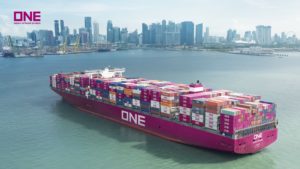 Ocean Network Express Pte. Ltd. (ONE) has announced the commencement of container shipping operations on 1 April 2018, which is according to the initial schedule laid out when the company was established on 7 July 2017. ONE is the result of an integration of the container businesses of three Japanese shipping carriers: Kawasaki Kisen Kaisha, Ltd (“K” Line), Mitsui O.S.K. Lines, Ltd (MOL), and Nippon Yusen Kabushiki Kaisha (NYK).

The integration lets ONE to incorporate best practices from the three companies and to take advantage of their combined 1,440,000 TEU fleet size, which makes the group the 6th largest container shipping company in the world. ONE employs a fleet of 240 vessels, including 31 super-large ships, such as world largest 20,000 TEU containerships. Supported by a worldwide high level, globally-connected organization, it offers 85 service loops and a comprehensive network linking more than 200 of the world’s major ports.

ONE is focused on offering its customers superior quality and the most competitive service throughout its network aiming to transform the global container business with totally new and innovative services.

As we wrote earlier, for overall organizational governance of ONE, the Holding company was set up in Japan and simultaneously a business management company was established in Singapore as well as regional headquarters in Hong Kong, Singapore, UK, USA and Brazil.

Mr. Nobuo Ishida – Region Head of North America, domiciled in Richmond, will be responsible for the USA and Canada.

“To be a truly global organization and shipping line, ONE believes its work force should have people with international orientation, outlook and background to ensure the service quality that we give is really supporting the global trade and more importantly, to make sure that ONE can really come across as one team globally to service the customers,” said Mr. Jeremy Nixon, Chief Executive Officer of ONE. “These regional executives bring to us their diverse experience and will significantly contribute to the operations and business growth of ONE globally.”