OPDR and Boluda to develop container terminal in Seville 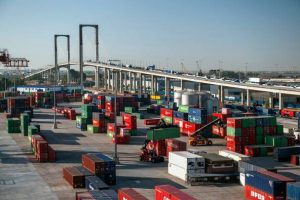 German short sea shipping line OPDR, part of the CMA CGM Group, and Spanish Boluda Corporación Marítima have started jointly operating the container terminal in the port of Seville, Spain’s only navigable river port located 52 nautical miles from the Atlantic Ocean. As announced in OPDR’s press release, OPDR, with the contribution of CMA Terminals, and Boluda Terminales Marítimas, as part of Boluda Corporación Marítima, have formed a joint venture Terminales Marítimas del Guadalquivir and won a public tender of the Port Authority of Seville in December, 2016.

On a total area of about 180,000 sq.m., the joint venture will control all container handling facilities including the railway terminal Muelle del Centenario. Containerised cargoes represent a third part of all freight traffic in the port of Seville. In 2016, the port’s container throughput was about 160,000 TEU, similar to 2015. In terms of container traffic, Seville is the second largest port in Andalusia and the most important port for strategic connections between the Iberian Peninsula and the Canary Islands.

According to the concession agreement, the joint venture is to ensure a more effective management and development of the intermodal logistics solutions in the port as well as enhancement of the terminal by providing a new container gantry crane. Currently the facility is equipped with two container cranes with a capacity of 45 tons and a performance of 30 units per hour.

Till Ole Barrelet, CEO of OPDR, said: “Seville is of great strategic importance for OPDR. This joint venture allows us to offer the best products for our client-integrated supply chains. I am very confident that we, together with Boluda, are able to realize all our plans and therefore permanently increase the performance of the port and railway terminal.”
Vicente Boluda, Chairman of Boluda, also stressed Seville’s value for his company: “The admission of this concession is really important for Boluda, due to its great links with Seville, where we have been providing towage services for nearly 30 years and where one of our corporation’s most important offices is located. This new project with OPDR will allow us to remain committed to the growth of this harbor, which is essential for the development of the city and its hinterland.”