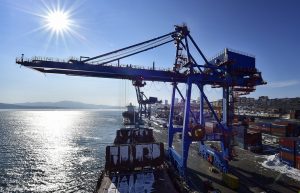 The Russian Ministry of Transport has drafted regulations to introduce the so-called “investment dues” at the nation’s seaports. The money collected through these fees are meant to be invested in construction and development of the state-owned facilities at the seaports. However, this may decrease the competitiveness of the Russian ports, writes PortNews.

The relevant documents have been published on the federal website for legal information, among them a draft of amendments into the order #387 of the Transport Ministry “On approving the list of harbour dues collected in the seaports of the Russian Federation”, which is to come into effect already on 1 November 2017.

The published federal documents introduce a concept of “investment dues” to be imposed on all vessels under foreign as well as Russian flags calling at Russia’s seaports. The fee is to be used for financing the investment programs on construction and development of the state-owned facilities at the ports.

The dues will be set up by the Transport Ministry for one year and a planned period of the two following years for particular ports. As reported, they will be imposed on all dry cargo ships (including containerships) and tankers entering and exiting Russian ports on their overseas voyages. Passenger ships and ferries may also be charged in case the ports and terminals of their calls are included in the federal investment program. Ro-Ro vessels and Russian fishing ships working within the country’s waters are exempted. The dues are charged in rubles and based on a vessel’s GRT. Containerships are subject to a 0.5 coefficient.

The new port charges are being introduced at a rather complicated moment for the Russian ports. As we wrote earlier, in August, President Vladimir Putin ordered to convert the port handling charges of Russian stevedoring companies into rubles as from 1 January 2018, although traditionally, these tariffs of most Russian ports, especially those handling containers, were set up in US dollars and this was generally accepted by the global shipping business.

Besides, following the extensive terminal development and the crisis of 2014-2015, which resulted in a 25% drop in container throughput in 2015, the container facilities in Russia are heavily underutilized. Thus, in the Baltic ports the utilization rate is just about 30%, in the Far East it is 40% and in the Black Sea it is 60%. The general cargo facilities are generally utilized by just 50-60%.

In these conditions, the additional port dues may affect negatively the competitiveness of Russia’s ports as compared with the neighboring states. Also, the investment fee will most probably increase the costs of exported goods and consequently have a negative impact on competitiveness of the national products on the global market. Port.Today will monitor this issue to assess the effects of the new charges in due course.