Japanese container lines integrate to become #6 in the world 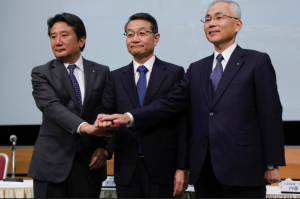 Today at a joint press conference, the three Japanese shipping lines – K Line, NYK and MOL – announced of an agreement to integrate their container shipping and overseas port businesses.

According to their joint statement, Kawasaki Kisen Kaisha, Ltd., Mitsui O.S.K. Lines Ltd., and Nippon Yusen Kabushiki Kaisha have signed contracts agreeing the establishement of the joint-venture company (JV). The shareholding structure will be NYK 38%, MOL and “K” Line 31% each.

The container fleet of the JV will comprise 256 vessels with total capacity of 1.4 mln TEU (excluding about 360,000 TEU on order book), making it the sixth-largest container carrier in the world, controlling about 7% of global container trade.

The JV is expected to realize integration effect of approximately 110 billion Japanese Yen annually and seek swiftly financial performance stabilization, says the statement. The announcement was made the same day that Japan’s three biggest carriers recorded a collective half-year operating loss of USD 484 mln, led by “K” Line. Merging their container businesses would generate scale and operational efficiency benefits allowing the lines to save $1 billion a year.

The liner business accounted for 30.5% of the revenue of NYK last year, 49.4% for K Line and 42% for Mitsui OSK, according to Bloomberg.

There will not be any change to the bulk shipping business of the three shipping companies.

The integration is subject to regulatory approval in the European Union, U.S., China and Japan.